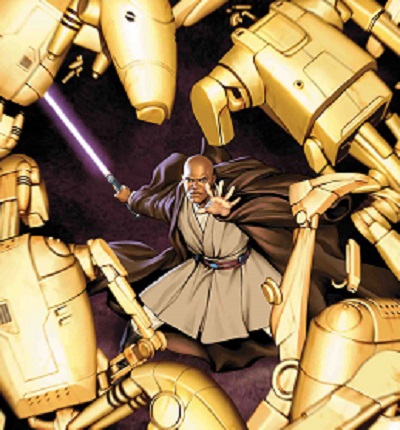 Mace Windu, the legendary Clone War fighting Jedi, will be returning in a new comic book series from Marvel Comics. Matt Owens and artist Denys Cowan are telling these brand new tales about the purple lightsaber-wielding Jedi (played by Samuel L. Jackson in the Star Wars prequels). Star Wars: Jedi of the Republic is taking place chronologically just after the beginning of the Clone Wars. Marvel have provided an explanation of what the new series will be about:

For over a thousand generations, the Jedi have been the peacekeepers of the galaxy…but now, at the dawn of the Clone Wars, they find themselves in a new role: generals in the Army of the Republic. As Mace Windu, one of the Jedi’s greatest warriors, leads a small unit of Jedi into battle shortly after the war begins, the Jedi must make peace with their new role, or be lost to the violence around them!

Star Wars Jedi Republic Mace Windu #1 will be published on August 30th by Marvel Comics. Five issues will be released in total in the series.