Halo: Rise of Atriox #1 is an athology comic collection from Dark Horse 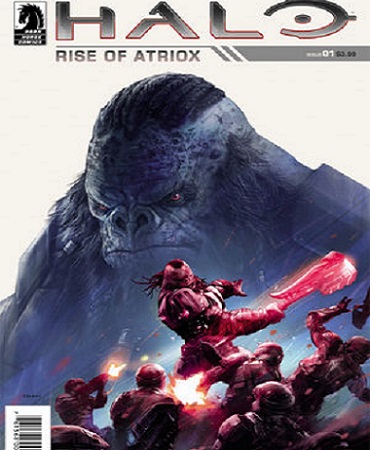 This new anthology series is inspired by the 2017 Halo Wars 2, released for the Xbox One back in February 2017. The real-time strategy game introduced a new ruthless villain, Atriox, who is central to the comic book series. A host of acclaimed comic book writers and creators are contributors to the anthology, including Cullen Bunn, Eric Nguyen, Alex Irvine, Jody Houser and Josan Gonzalez.

The synopsis of Halo: Rise of Atriox #1 is: Atriox, the legendary Brute under the command of the alien collective known as the Covenant, leads a Brute assault against a UNSC military outpost. Wave after wave of Brutes are lost attacking the human outpost defended by a group of UNSC marines, the ruthless Atriox soldiers on. As his comrades fall, Atriox’s hatred for the Covenant grows.

Halo: Rise of Atriox #1 will be available from August 30th by Dark Horse Comics.