Fans of Army of Darkness and the Evil Dead franchise should get a kick out of some of the comic book titles that will be published by Dynamite Entertainment in October. It’s a veritable fest in the making of Ash Williams and the forsaken demonic, undead spirits. The Army of Darkness Furious Road series reached a conclusion in early August, with the publication of the sixth and final edition of the miniseries. A full length trade paperback version of Furious Road will be released in October. Writer Nancy A. Collins and illustrators Kewbar Baal and Gabriel Hardman are the literary and artistic geniuses behind this miniseries, which those accustomed to the Evil Dead franchise will appreciate. Dynamite have a long tradition of innovating new avenues in the Army of Darkness and it’s fun to observe how the established characters and themes are developed.

For those unaware of Furious Road here is a brief synopsis of the plot. In the not too distant future the Army of Darkness has unremittingly expanded and heaven help us taken over the entire world, civilization is in serious jeopardy. The best hope for salvation is a motley alliance of supernatural creatures who prefer the world as it formerly stood. The unlikely supernatural compadres include Frankenstein Monster, Dracula’s Daughter and an assortment of vampires, witches and werewolves. To complicate matters their quest to eradicate the demons to succeed depends on Ash Williams and the Necronomicon Ex-Mortis.

A new series, Army of Darkness/ Xena: Forever…and a Day series begins circulation in October. This departure from the previous edition crosses over with television’s Xena, Warrior Princess. Two different universes collide in this collaboration of two massively popular characters in popular culture, each with their own cult followings.

Xena the Warrior Princess calls rather unwillingly on the assistance of Ash Williams after her lands are besieged by evil, undead forces. The wise-cracking and irascible Ash is not Xena’s ideal world-saving partner and the friction between the two characters is another hazardous disaster that they need to overcome. Nick Barrucci, Dynamite CEO, said “As one of the most unlikely heroes in pop culture, it makes it impossible not to love him (Ashley Williams)… unless, of course, you’re a battle-hardened warrior like Xena, who has a little less tolerance for such shenanigans. It’s an odd couple pairing that fans of both franchises will love!”

Army of Darkness/ Xena: Forever…and a Day will be written by Scott Lobdell and illustrated by Elliot Fernandez. Scott Lobdell has described his take on the upcoming series: “In this story of the first jilted lover in the history of Mankind, where we learn about the third wheel who was left behind when Adam and Eve got booted out of the Garden of Eden, we see an army of the undead that is so huge that only the implacability of both Xena and Ash could hope to stop them!” Lobdell continued ” This is an epic tale of horror, time travel, friendships that last a century, action, and comedy all wrapped into a big-ass honking story that stars both characters front row and center”.

Army of Darkness/ Xena, Warrior Princess: Forever… and a Day #1 will be published on October 5th. A digital version will be available through Comixology, Dynamite Digital, iVerse, and Dark Horse Digital.

Army of Darkness: Furious Road (Trade Paperback) will be published on October 5th. 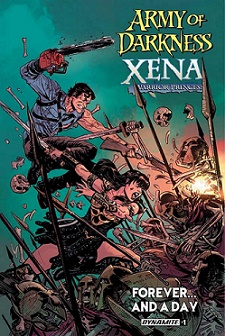