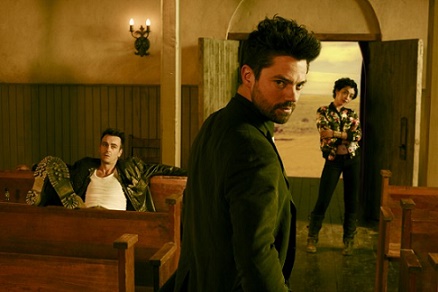 The supernatural, black comic thriller reached a final conclusion in episode 10 of the first season on July 31. AMC has produced another major TV event, this latest show follows hot on the heels of Breaking Bad, Walking Dead, Hell on Wheels and Mad Men. Preacher began airing on May 22nd, 2016, with the Vertigo comic book everybody wanted to see developed finally in a live action format, earlier contorted and somewhat difficult production attempts dating back to 2008 had ended up unsuccessful for various reasons. This first season was envisioned by the show’s creators, in Seth Rogen, Sam Catlin and Evan Goldberg, as a prequel to the comics, capturing the events before Jesse, Cassidy and Tulip departed on their road trip across America. So, what do we make of season one?

Jesse Custer (Dominic Cooper) has busily harnessed what he has assumed are divine powers, gifted to him by god. In time he uncovered more about the truth of Genesis, the Word of God and the supernatural powers that he is possessed with. Genesis it is revealed is a spiritual force created by an illicit relationship between an angel and a demon. By the end of the series, Jesse is coming up against a mysterious and undead cowboy known as the Saint of Killers, who we can probably ascertain will be making an appearance in season 2. Meanwhile, the one/off relationship between Jesse and former assassin Tulip O’Hare (Ruth Negga) has intensified and a love triangle is brewing involving vampire Cassidy (Joseph Gilgun).

In the final instalment of season 1, Jesse and the Anneville residents were granted an audience and an impromptu Q & A session in the church with god himself. This implausible sounding dialogue was rendered possible through a video-conferencing system organized by the angels. Of course the townspeople proceed to bombard the supposed creator of the universe with a host of inane and accusative theological questions. Jessie wants to know why he was selected for Genesis. The congregation eventually figures out that the god they are video conferencing is faking it, an angel has substituted for him and taken his place.

The finale of the episode is the total destruction of Anneville, caused by an explosion at the disreputable Quincannon’s meat packing plant. After all the confusion, Jessie, Tulip and Cassidy decide a road trip is called for and embark on a new adventure, to find god once and for all.

Preacher has covered the protagonist’s disillusionment about not finding god and parallels the search for spirituality that is symptomatic of our post-modern society. The show asks some sharp questions about morality, with Custer committing to a strict code of principles, but capable of questionable violence. This is typified in the relishing of torturing Carlos. One of the premises of the season has explored Jesse as a hero and anti-hero. Season 2 will begin afresh without most of the characters introduced this season.

The show’s producers Seth Rogen, Sam Catlin and Evan Goldberg will be in the driving seats again for the second season, which will we are led to believe will be more closely aligned thematically to the comic. Season 2 will be appearing on our TV screens in 2017.