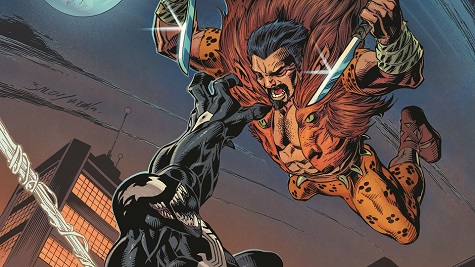 From previous issues we know that Stegron the dinosaur man has created a mutated group of dinosaur people, who are now living below New York’s streets. Venom/ Eddie Brock must protect them from Kraven, who is searching for the ultimate prize.

Kraven, an undying hunter, is usually an adversary of Peter Parker/Spider-Man. His half brother the Chameleon is another villain also shows up with regularity in Spider-Man’s adventures. It’s great to see Kraven back in a story arch that definitely suits his character.

Mike Costa and Mark Bagley are crafting this tale. Bagley of course was the artist responsible for the first Venom: Lethal Protector saga back in 1993.