Issue #2 of Jupiter’s Legacy 2, the sequel to the original smash hit comic series, will be published on July 27th. The compelling new season story arch was introduced on June 29th and is now available in digital format. With the episode 2 release rapidly moving upon us, the series is beginning to build momentum. The creative genius’s behind Jupiter’s Legacy are Mark Millar (Kingsman, Chrononauts) and Frank Quitely (The New X-Men, All-Star Superman).

The original series of Jupiter’s Legacy hit stores in 2013. In the Jupiter’s Legacy original series the fortunes of Sheldon Sampson and his cohorts were followed across five editions. After the Stock Market Crash of 1929, Sheldon and a group of dismayed friends journeyed to a mysterious island 600 miles west of Cape Verde. They are transformed into a group of superheroes the Union, with their leader Sheldon as Utopian, joined by Brainwave, Lady Liberty and Blue Bolt.

In Jupiter’s Legacy Vol 2 #2 superhero offspring Hutch and Chloe have come out of hiding with son Jason to assemble a team of super-crooks from around the globe. In Issue #2 our heroes will encounter a psychic Japanese super villain Raikou and experience passing through different levels of consciousness. At the same time of this precarious mission, their enemies are continuing to gain control of cities across the world.

JUPITER’S LEGACY VOL 2 #2 will be published on Wednesday, July 27th. 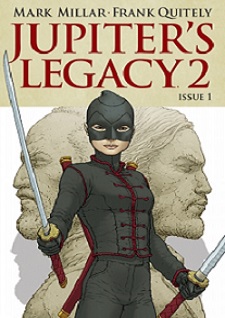