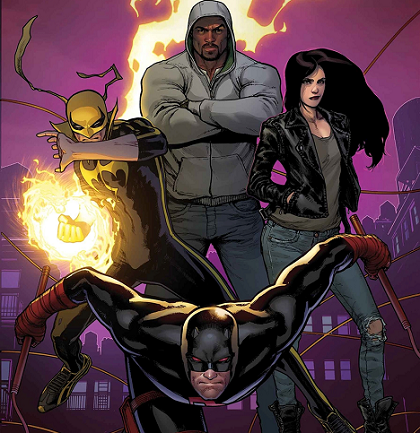 Brian Michael Bendis and David Marquez are bringing us this new superhero-team, in preparation for the Marvel-Netflix TV show, which will be airing this August. The Defenders team has occurred semi-regularly in print since the 1970s, but this line-up of Daredevil, Luke Cage, Jessica Jones and Iron Fist is brand new.

The original 1970s team of Hulk, Doctor Strange, Silver Surfer and Namor will sadly be absent. That sounds like a cool line-up, but after the very well received Netflix TV shows and the recent Marvel stand alone comic titles, audiences probably would rather read about Daredevil, Jessica Jones and co.

Defenders #1 will be published by Marvel Comics on June 14th.