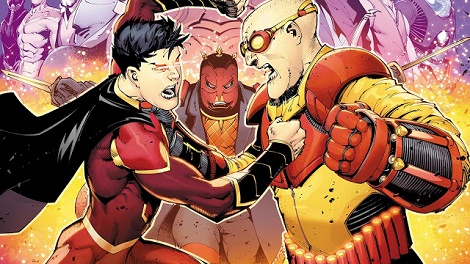 New Super-Man #6 is the concluding edition of the story arc and sets forth both answers and intriguing new questions regarding the themes explored in the Superman saga series.  The decision by DC Comics and scripter Gene Luen Yang (Avatar: The Last Airbender, Superman) to invent a justice league for China in the Rebirth universe has inspired some original issues.  We have gradually learned more about Kong Kenan, his justice league compatriots and their super powers.

Most of the Issue #6 takes place on a commercial plane as Kong Kenan fights against the Human Firecracker and his Starro’s minions. The new Bat-Man and New Wonder-Woman also play important supporting roles. Kong and Flying Dragon General make it onto the plane to rescue the civilian passengers and Batman and Wonder-Woman.

This is complicated by the important fact that at the beginning of the episode Kong has lost his powers. Nevertheless, they battle with the Freedom Fighters and Human Firecracker in some entertaining action scenes. Just in time, Kong rediscovers his powers. They do eventually make it of the plane for a final confrontation with the Human Firecracker. 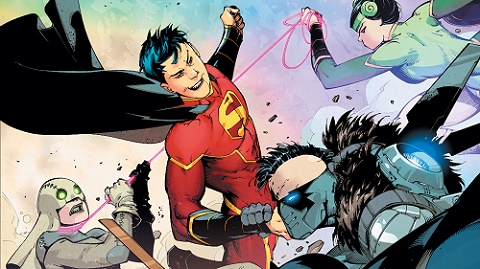 There are some interesting revelations about Kong’s family which will doubtless serve as character motivation in future episodes. Despite some tense scenes, the character displays more humorous qualities than Superman and even some spoiled tendencies. Clearly, issues #1-#6 have represented an important learning curve in the development of the young superman.

The art work by Viktor Bogdanovic (Batman Arkham, Suicide Squad) has a cartoon style approach which is fun, and a nice contrast to the other recent Superman depictions. The panelling is very detailed with a brisk pacing, while the coloring by Richard Friend has a saturated, vivid quality and contributes well to the atmosphere. Expect plenty of action sequences.