The return of Dr. Rush, Colonel Young, Camile Wray, Eli Wallace and the rest of the characters from the fan-favorite TV show Stargate Universe, is upon us thanks to this comic series courtesy of American Mythology Productions. The creative team behind this series includes, Stargate Atlantis writing team of Mark L. Haynes and J.C. Vaughn, as well as The Land That Time Forgot and Marvel’s Gorilla-Man artist, Giancarlo Caracuzzo. 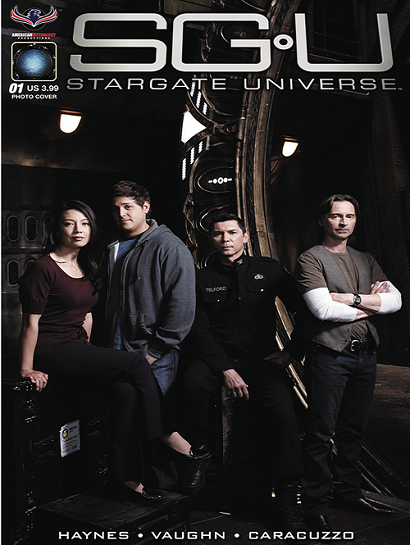 The show ended rather abruptly and without the opportunity to provide many answers to some of the questions the show revelled in during its run. Fortunately, Stargate Universe begins right where Season Two of the acclaimed science fiction show ended, with the crew and unwilling passengers of Destiny set to cross a vast expanse of space with no margin for error:

“With almost all of the willing and unwilling crew of the ancient starship Destiny in suspended animation, only Eli Wallace is left awake to repair his own stasis pod before time runs out. While he races against time, a new and unexpected danger threatens the fragile plan designed to keep everyone alive and away from the aliens who had been pursuing them. What strange new menace confronts Eli, Colonel Young, Doctor Rush and the others?”

Stargate Universe comes with five covers: Main Cover by legendary artist Greg LaRocque, Character Designs Premium Cover by interior artist Giancarlo Caracuzzo, a Photo Cover, a Blank Sketch Cover, and an exclusive retailer incentive Flashback Photo cover. Another Stargate comic, ‘SGU: Icarus’ is on the horizon, interestingly it is based on a story from Stargate Universe co-creator Robert C. Cooper and will be published later in the year.

« DC and Dark Horse in Wonder Woman and Conan crossover
Back in the MCU – Spider-Man: Homecoming review »