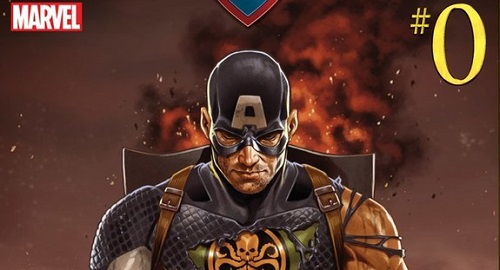 The Secret Empire event, which has been teased since January, will soon be released. Nick Spencer and Daniel Acuña’s expansion of the recent Captain America storyline will begin in Secret Empire #0. The Marvel Universe is encountering a new threat from this time their own ranks. In a head spinning twist on the standard themes Captain America has turned his back on superhero-dom and is now an agent of Hydra.

Captain America has a master plan that he is about to unveil and most of his pieces have already come to pass. This includes the second Civil War, Jack Flag’s death and the alien queen Chitauri.

Axel Alonso, Marvel Editor-in-Chief, has commented “Wherever you find favor within the Marvel Universe, Secret Empire is a story for you. When the world’s most respected and trusted super hero, Captain America, assumes ultimate power and goes bad, it serves as a rallying cry for all the heroes.”

This dramatic change of face will have repercussions that affect the entire Marvel universe. We are informed that the Avengers, Guardians of the Galaxy, the X-Men and Defenders will coalesce into the action of this new event. It’s been a year of headline events for both Marvel and DC, with Monsters, Rebirth, Civil War, Dark Knight: Metal and others. How will Secret Empire stack up? Only time will tell.

Secret Empire begins on April 19th with issue #0. Secret Empire #1 will be in comic book stores from May 3rd.

« Guardians of the Galaxy Vol. 2 Latest News
What we know about Shane Black’s Predator sequel »