Deadpool & The Mercs For Money #9: ‘Til Death Do Us’ Part 3 about to hit comic stores 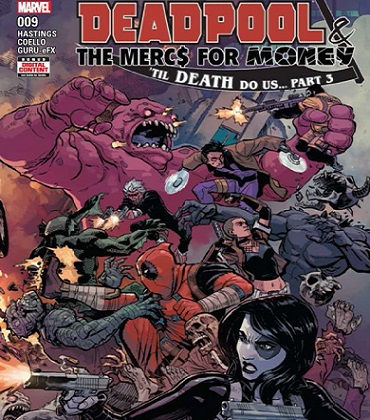 We are fast approaching part 3 of the 6 issue ‘Til Death Do Us’ miniseries that is taking place within the regular Deadpool & The Mercs For Money series. In the next edition Shiklah’s people demand justice and the Monster Metropolis declare war on the surface world. Deadpool must choose between succubus queen Shiklah, who is now his wife, and his role as everybody’s favorite hero.

Deadpool’s romance with the monster queen Shiklah in the earlier episodes certainly had his head spinning. The mercenary for hire stood by her side valiantly to defeat Dracula, but it looks majorly like events will be forcing Deadpool to re-evaluate the choices he has made in his life.

This issue is written by and Christopher Hastings (Vote Loki) with art by Iban Coello. Cullen Bunn, a Deadpool aficionado, is taking on the primary responsibilities of writing the The Deadpool and Mercs for Money series. Other talents that have been enlisted are writers Joshua Corin (Nuclear Winter Wonderland) and Gerry Duggan (Uncanny Avengers) and artists Salva Espin, Scott Koblish and Reilly Brown.

Deadpool & The Mercs For Money #9 (‘Til Death Do Us’ Part 3) will be available in comic book stores from March 29th.