The first issue of the new Marvel comic series, which features The Punisher and Daredevil, sold 110,000 copies in May, with the second issue out on June 29th also expected to sell well. The popular Netflix show, which features the pair along with Elektra and Kingpin, has received great reviews and increased the interest in the Punisher/Daredevil relationship. Both crimefighters, but with very different approaches to their brand of vigilante justice, which makes for an interesting dynamic, with the two combative protagonists providing a reflection and contrast upon each other. Particularly with The Punisher often crossing the line between hero and anti-hero.

Issue #1 written by Charles Soule, with penciling by Szymon Kudranski and cover art by Reilly Brown, features a story involving Daredevil’s daytime gig as ADA Matt Murdock, who is attempting to prosecute a mobster, but clashing with Frank Castle/The Punisher, who has his own plans to put the criminal down for good. Issue #2, which is out now, continues the story, with the Russian gangster’s prison transport at first evading the Punisher, but then being attacked by the mobster’s own associates, with Daredevil (and his sidekick Blindspot) caught in the middle.

Issue #3 is out on July 6th, with the story again by Soule and the same creative team as before. Marvel’s press blurb states:

Getting to the airport is always a hassle. Getting a Russian mobster to the airport for trial relocation while avoiding The Punisher and mob associates can be deadly! Daredevil has trained Blindspot well, but nothing can prepare him for what will happen next!

This exciting series is worth following and fans of the TV show should enjoy discovering more about the Daredevil/Punisher relationship and their ongoing dispute over the best way to put criminals out of action. 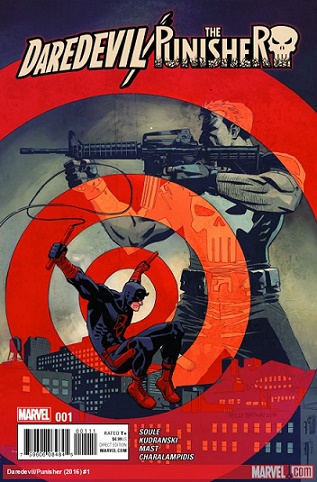