In the Dead No More Clone Conspiracy, long term Spider-Man nemesis the Jackel has been busily creating a host of new clones. Spider-Man undoubtedly did not expect to come into contact with any of these individuals again, former super villain adversaries who had been killed over the years. Now, thanks to the Jackel’s scheming they are back. Dan Slott (Amazing Spider-Man) is creator in chief of the Clone Conspiracy series, he has gained the reputation of the best Spider-Man saga writer in modern times. This Clone Conspiracy has been teased for some time, but Slott has refused to divulge any insider information, leaving audiences to speculate. 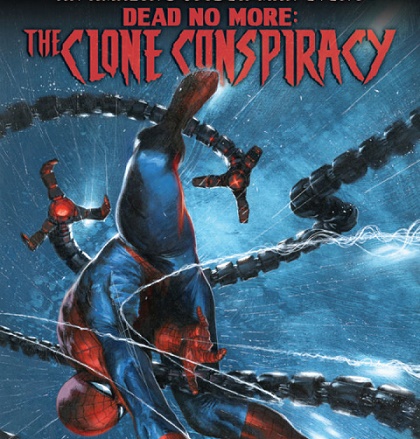 Episode #2 continues with Peter Parker/ Spider-Man investigating the behind the scenes activities at New U laboratories. The Jackel has formed an alliance with other bad guys in exchange for promises to resurrect their lost loved ones, Rhino, Lizard, Electro and Dr Octopus are all on board. The episode opened with Kaine, the Scarlet Spider, battling the Jackel’s zombie clones in San Francisco, we return to just why Kaine (the earlier Spider-Man clone from Web of Spider-Man #119) is relevant to the storyline later. Doctor Octopus continues his physical contest with the webcrawler inside New U laboratories. Spider-Man is captured and held at the laboratories, Doc Ock reveals that he was alive and well inside the Living Brain.

Mid-episode, Spider-Man and the Jackel commence an impromptu ethical debate, Miles Warren/ the Jackel proclaims that clone loyalty is assured through a secret formula that he created without which the reanimation process will reverse. He insists that his genuine desire is to uncover the key to immortality. Spider-Man manages to escape with the assistance of Gwen Stacy and Kaine. In a major reveal we learn more about what the Jackel’s diabolical plan may be, as Kaine informs Spider-Man that the Jackel has another hidden agenda the engineering of zombie clones, infected with the Carrion virus. 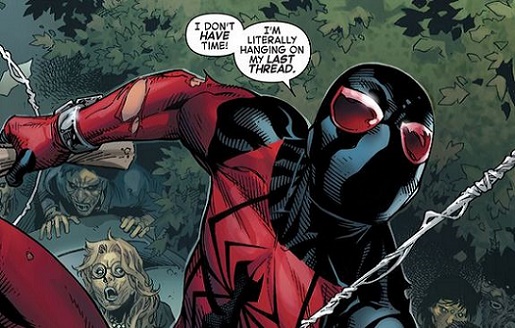 There will be five episodes in this mini-series, at last concrete plot details are being presented for our viewing pleasure. It’s an interesting interlude from the Amazing Spider-Man series, and writer Dan Slott has his chance to explore some more classic Spider-Man themes and the complex nature of the webcrawler’s moral system. Issue #3 looks to be a the seminal episode where audiences discover where the allegiances truly fall and precisely what is the Jackel’s master plan.

Jim Cheung’s art work is impressive, especially the attention to detail of the action sequences. He manages to compress intricate images into each panel (credit also to inker John Dell), which progress at a brisk pace. The design texture is certainly more expressive and vivid than other Spider-Man titles.

Issue #3 of Dead No More The Clone Conspiracy will be published by Marvel Comics on December 7th.

« Aliens: Dead Orbit is in development by Dark Horse and Fox
Pathfinder and Worldscape Roleplay collaboration from Dynamite »