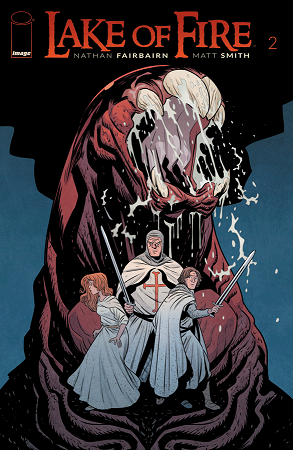 It sounds like an epic amalgam of thematic style and historical subject matter, the knights of the crusades versus alien invaders. Audiences have heard of cowboys vs aliens, but medieval knights is an original take on the war of the worlds scenario. Lake of Fire #1 launched this brand new graphic novel series from Image Comics in August. The backdrop is the murky world of the dark age Christian crusades, just as many of which targeted other Christians – believed heretics in their own time. In this instance we are transported to the middle of the Albigensian Crusade. In the year 1220 AD, a band of crusaders and heretic Cathars run into a crashed alien vessel in the Pyrenees mountains, the outcome is a deadly fight to the death.

This juxtaposition of historical periods was created by writer Nathan Fairbairn and artist Matt Smith. As a colorist Nathan Fairbairn has worked on projects such as Batman Incorporated and Wonder Women, while Matt Smith’s previous credits include the graphic novel Barbarian Lord. Chris Burnham is lending his talents to the cover designing.

It’s worth checking out this saga as the battle for survival against the aliens continues. The second edition was published by Image Comics on September 28th and issue #3 is scheduled for release on October 26th.