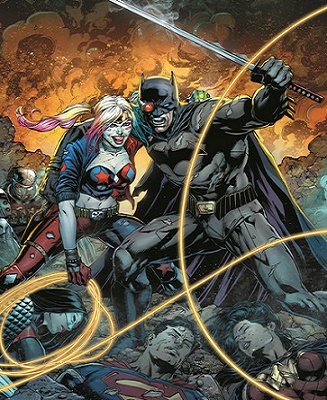 This December will witness DC Comic’s first major event of  the Rebirth universe, the Justice League will be contesting the Suicide Squad. We are promised the game-changing introduction of new characters, which will shed new visible light on whats been behind the scenes and indeed shaping Rebirth. The upcoming mini-series will be kick-started in December with a prelude in Suicide Squad #8, and the subsequent January issues of Suicide Squad #9 and #10 and Justice League #12 and #13 will lead in the new series.

We are aware of some of the DC comics figures lined up for the mini-series, that includes from the Justice League, The Flash, Batman and Wonder Women and from the Suicide Squad: Deadshot, Harley Quinn and Boomerang. Other major names in Superman and Green Lantern will be entering into the action in some form. More names will probably be appearing in the later January and February episodes.

The plot details as disclosed at this point time revolve around the Justice League’s discovery of the hitherto unknown and concealed Suicide Squad and Amanda Waller’s Task Force X. The secret actions of the government-sponsored black ops team are laid bare for everyone to comprehend. The existence of the Suicide Squad does not please the members of the Justice League who want to bring about its demise. However, things could never turn out to be that simple, there exists a second deadly secret strike team apparently even more dangerous that threatens everybody. We do not know who this second team will be, but they inspire the Justice League and Suicide Squad members to put aside their standard differences and join forces.

According to DC some foundational elements of Rebirth and new information about established characters are to be unveiled to audiences. Geoff Johns, President Chief Creative Officer, DC has said “with the heroes back on the board, now it’s the super-villains turn. And the events within will set the stage for Rebirth Phase 2 as a surprising team emerges and another piece of the puzzle of the future of the DC Universe, and the past, comes into focus”.

This two-month mini-series will cover six-issue weekly miniseries, Justice League Vs. Suicide Squad issues #1 and #2 will be written by Joshua Williamson with art by Jason Fabok and Tony S. Daniel. Issues #3 through #6 debut weekly throughout January.