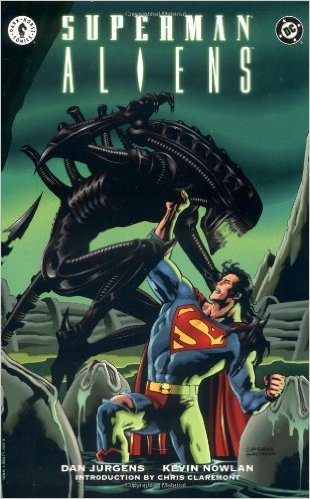 DC and Dark Horse have put together a collection of stories featuring Superman in crossover universes, the two publishers have put Superman in a variety of situations which this collection celebrates. The main selling feature is the crossover of Superman with the ‘Aliens’ universe, the saga that began with Ridley Scott’s film Alien in 1979, continued by James Cameron in Aliens and since then expanded into a variety of spin off movies, video games and comic books. In the comic book universe Superman has been battling the xenomorphs from Aliens for a while now, this collection features Superman vs Aliens Volume 1 (originally published in 1995) and Superman vs Aliens Volume 2: God War (2002). The writers use the plot device of Superman’s powers temporarily diminishing- due to him being in a location with a distinct lack of yellow sunlight that his body requires to give him his powers- to make the Xenomorphs a believable threat to the Man of Steel. The story and layout art is by Dan Jurgens, with finished art by Kevin Nowlan. This anthology is timed to coincide with the 30th anniversary year of the Alien film franchise.

Also included is Superman journeying into the world of Madman and into the jungle with Tarzan, in The Superman/Madman Hullabaloo and Superman/Tarzan: Sons of the jungle. The collection includes over four hundred pages of material, with four full Superman arcs from Dan Jurgens, Chuck Dixon and Mike Allred, original covers and sketchbook art from the original creative teams. The Dark Horse Comics/DC: Superman is out from August 3rd.

« A&A: The Adventures of Archer & Armstrong out in August
Suicide Squad Review and Commentary »