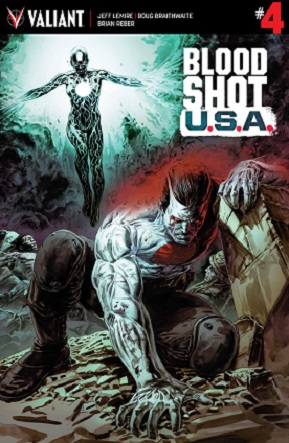 In the Bloodshot USA saga an escaped weaponized nanite virus has held New York precariously in its grip, with the inhabitants of the city falling into unbridled pandemonium. Their only realistic hope, Bloodshot, stood firm against the nanite infused hordes of zombies in episode 4.

Readers witnessed what could only be described as the super soldier’s last stand in New York. The hard coded weapon of destruction that is Deathmate reappeared at a crucial moment to assist in the operation. To complicate matters old flame Magic also turned up, which fermented some emotional torment for Bloodshot. Old feelings were reignited for many of the characters. His blood stream may contain a billion nanocomputers but Bloodshot underneath it all has feelings like everybody else.

Kozol and Rising Spirit have served as season bad guys and have provided some entertaining moments. They were no doubt cackling with glee at the start of issue #4’s action as the nanite infected zombies were in serious danger of overrunning Bloodshot’s battle squadron. Regular hero Ninjak lent his more than capable skillset in a few entertaining scenes. But, in the end Deathmate/ aka Kay McHenry stole the show right at the conclusion to the issue. It was a rewarding resolving of story arcs with a neat winding up of circumstances. Just what role Deathmate will take on board now remains unclear. Will her past memories and experiences now return in full?  This is a spoiler free review, but trust me Bloodshot USA #4 is worth reading just for the end finale.

Jeff Lemire and Doug Braithwate have portrayed the relationships in a very captivating manner, the writer and artist consistently perform an excellent role in expanding the characters past the written page. The fights scenes are really the hallmark of the season and the final episode produces some adrenaline-charged and violent action sequences. It’s an amazing amount of detail that we can see compacted into every page. Colorist Brian Reber and Dave Lanphear (lettering) deserve praise for their efforts, their rendering of the battle sequences enables the engagements to appear all the more visceral and wonderfully detailed.

Bloodshot USA #4 was released by Valiant Entertainment on January 25th and is available in comic book stores and at online retailers now.