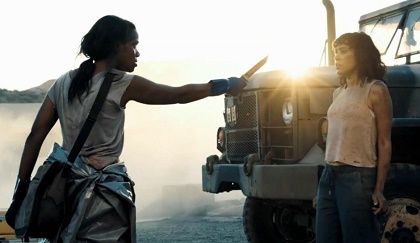 AMC will unveil a new web series that commences on October 23rd entitled “Fear the Walking Dead: Passage.” The first instalment will premier during one commercial break within the launch of the first episode of “The Walking Dead” Season 7. The one minute log webisodes will be produced by “Fear the Walking Dead” showrunner and executive producer Dave Erickson. The team also includes director and producer Andrew Bernstein and writers Lauren Signorino and Mike Zunic.

The second season of webisodes is again a stand alone story, that follows a fearsome survivor, Sierra, who agrees to help an injured woman, Gabi, in exchange for refuge in an apocalyptic sanctuary. Over the course of their harrowing journey, the women go on to face many dangers and learn what they need to survive. The producers have stated that the story will be an expansion of the world imagined in the Walking Dead franchise, and will be occurring at the onset of the apocalypse.

The subsequent episodes of “Passage” will be released to audiences during new episodes of “The Walking Dead” for the duration of Season 7. The original webseries episodes from last year’s “Fear the Walking Dead: Flight 462” proved very popular with TV audiences, which prompted this second season run. The webseries will also be available online.

« Deadpool: Back in Black Issue #2 Review
Bloodshot USA #1 is a stand alone series from Valiant »