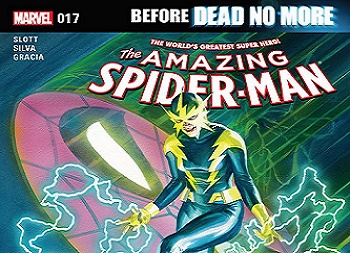 Amazing Spider-Man #16 began the Before Dead No More arc, written and illustrated by Dan Slott and R.B Silva (Slott is behind most of this season’s run). The Jackel has been using genetic cloning techniques to rejuvenate some earlier villains. We have learned that a subdivision of Parker Global Industries, subverted by the Jackel unknowingly to anybody else – including Spider-Man, has developed the medical procedures to engineer life saving organs from clones. This knowledge even enables the revival of people who were presumably dead.

In Issue #16 after an explosion at one of Parker Industries labs Spider-Man arrived just in time to save the day, but one of the employee’s who survived is near death and a guilt wracked Peter Parker contacted New U Technologies, in a desperate bid to save his life. The heart condition of Aunt May’s husband, Jay Jameson, compounds his willingness to listen to the alleged medical miracle. In Issue #17, a suspicious Spider-Man began investigating the scientific research lab, sending in Hobie Brown as the “Prowler” (who doubles as Spider-Man on the West Coast) undercover to delve into the mysteries. He makes some startling discoveries about the truth behind Parker Industries.

Not a conventional villain, the Jackal ambiguously regards himself as acting in the greater good by breeding a new team of good guys, even managing to suggest a self-aggrandising view of his actions. Among those we discover returned to the living by the Jackel’s creepy enterprises are Francine, former groupie to super villains, the Lizard and Electro. But, the ulterior motive of the Jackel and the New U’s are still tantalizingly very much a conundrum. As the secrets of Before Dead No More are slowly revealed we are building a picture of the grand game behind the Jackel’s schemes.

It appears that we ground is being laid for The Clone Conspiracy saga later this year. Next time (Issue #18), Doc Octopus will be making a return. He has been enclosed inside The Living Brain up until now.